In preparing for a family history research trip to Newton County, Texas, the two most important stops are the Newton County Historical Commission and the Newton County Clerk's office.  Fortunately, they are within walking distance of one another.  The Historical Commission is housed in the same building as the public library and has about 2,000 square feet of artifact displays, and probably 200 linear feet of bookshelf materials. It is staffed with volunteers who are knowledgeable about the collection, but may not be knowledgeable about the records in the County Clerk's office.

The county clerk's office has land and marriage records along with a variety of court records from the 19th and 20th centuries.

Newton County, Texas is a small county but has quite good historical and family history resources, especially for county with a small population base. 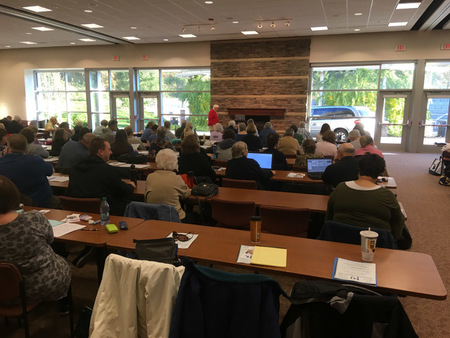 We made an early morning trip to Grand Rapids for CeCe Moore’s October 13, 2018 Seminar “So then what did you do? DNA!” hosted by the Western Michigan Genealogical Society of Grand Rapids. The trip was well worth it with a beautiful fall color drive to bookend the day. At FGS, Rootstech, and Dallas Genealogical Society conferences, we have attended perhaps a half dozen sessions on DNA, and have a pretty good understanding of the various tests and how to use them, but we don’t have a great handle on how to really integrate DNA testing into research. This seminar gave some wonderful case studies that help in figuring out how to proceed.

Although she gave a good overview of the DNA tests and basic uses, most of the audience was already quite familiar with the basics–about 90 percent raised their hands for the opening questions on how many have tested. Most of the day focused on how to figure out which matches to pursue and how to pursue them to prove or disprove particular relationships. Because her specialty has been locating parents of adoptees, there was a lot of material on building out trees of living relatives. For several of the DNA-related proofs that we need, we both have to test some living people with specific probable relationships and these case studies were invaluable in figuring out how to approach this problem.

For society presidents who are looking for a full-day DNA seminar, but are concerned about having a speaker who can effectively present to both beginners and those with some experience with DNA testing, CeCe Moore would be a good speaker. Based upon the number of attendees who have already done tests compared to other seminars that we have attended, the problem of vastly different experience levels is probably not as great as it was a few years ago. 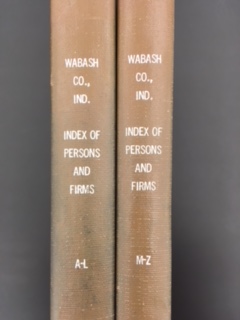 While doing research at the Allen County Public Library, I stumbled across the Wabash County Index of Persons and Firms. If doing Indiana research for a particular county, this should be a starting place. In the early 1980's the Indiana Historical Society undertook a massive project to index the county histories of each county in the state. Since many counties, including Wabash have had several history books compiled, each of which is several hundred pages, this was a massive undertaking and can save a researcher much time. Many of the county histories themselves are not indexed, although some reprints from the 1990s include the index prepared by the Indiana Historical Society.

The index has a key at the front that gives the codes for which county history book is referenced; the reference for a person uses the code and the page number within the book. 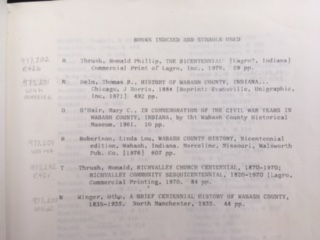 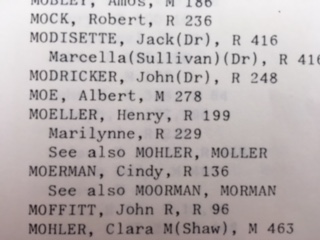 The library is in the Courthouse Annex, and is open for general business hours six days a week; it’s hours are better than the the county library. This is a great library and has a large book collection of both local and regionally useful books. The library has several computers with Internet connections and access to the library version of Ancestry. The volunteers are knowledgeable about local materials and genealogy in general, but may not be able to assist with technology questions. The Wi-Fi password is a random string on an unlabeled post it. Two of the items in the collection were very useful to me:

In early Texas, the Court Minutes are as much a record of county administration as they were of what we now think of as court cases. In the court minutes, I found references to the executor of William’s estate; the executor was part of several road building crews authorized by the county court. The court minutes are fascinating reading, and offer an interesting perspective on 19th century life in Texas. Do not stop at the name index entries for your ancestor; make sure to read some of the surrounding entries and record names of others to establish a FAN club for your ancestor.

The muster roll transcripts are useful in finding ancestors who served in the Texas Militia during the republic. Today, much of this information is available on the Texas General Land Office web site, but the book form is helpful when you are looking to develop a FAN club for an ancestor who is known to have served in the militia.

The courthouse is short walk from the Annex and is where all of the County Clerk records are held. The indexes are on the main floor while the individual records are in the basement. Land records are well indexed for both Grantor and Grantee back to the early days of the county, but probate record indexes exist only for 1952 and later. Copies are $1 per page. The