Tom Jones spoke at the Dallas Genealogical Society (DGS) Spring Seminar on March 18, 2017, covering a variety of case studies for both online and primary-document research. This was the first time that I've heard him speak, and I got a lot out of each of his lectures, but especially Solving the Mystery of the Disappearing Ancestor and Creating a Family History of Lasting Value.

Because Kristin is the DGS Vice President and arranged the seminar, we had the privilege of having dinner with Tom as part of both the Friday night and Saturday night groups, where we learned the joys, trials and tribulations of editing the National Genealogical Society Quarterly. When asked about tools for managing sources and citations conveniently, he wants to know if someone finds one; it was both a revelation and a disappointment to know that even the editor of the NGS Quarterly has not found a source/citation tool that works well for genealogical sources.

We have been looking for a marriage record for a set of great grandparents for...a long time. This was the first task my sister gave to me when I went to Salt Lake City with Kristin for RootsTech in 2013.  I was brand new to genealogy–it was Kristin’s hobby–and I asked my sister for some goals. She gave me the goal of finding documents that had eluded her. In hind sight, this was perhaps not the best way to begin learning genealogy techniques.

Her first brick wall was fo find a marriage record from Indiana in the 1870’s, and the second a birth record from New Mexico in 1881. There are good reasons that she has been unable to find anything.

Kristin recently went to Washington, D.C. for a college room-mates reunion and planned to spend a couple of days afterward at the National Archives and at the Daughters of the American Revolution (DAR) Library. In preparing for the trip, I did a little work on the DAR website and pulled down a couple of relevant DAR applications that referenced family bible records extensively. I suggested that she try to find some family bible records. She did. She found a family bible record in the Genealogical Records Committee Collection that is not part of any of the applications that I retrieved, but which was part of a collection scanned and indexed by a DAR member in South Texas in the 1980’s. It has much of the information that we have been chasing and opened up a new line of research.

Kristin’s visit to the National Archive provided a treasure trove of Civil War service records, but that is her blog entry. 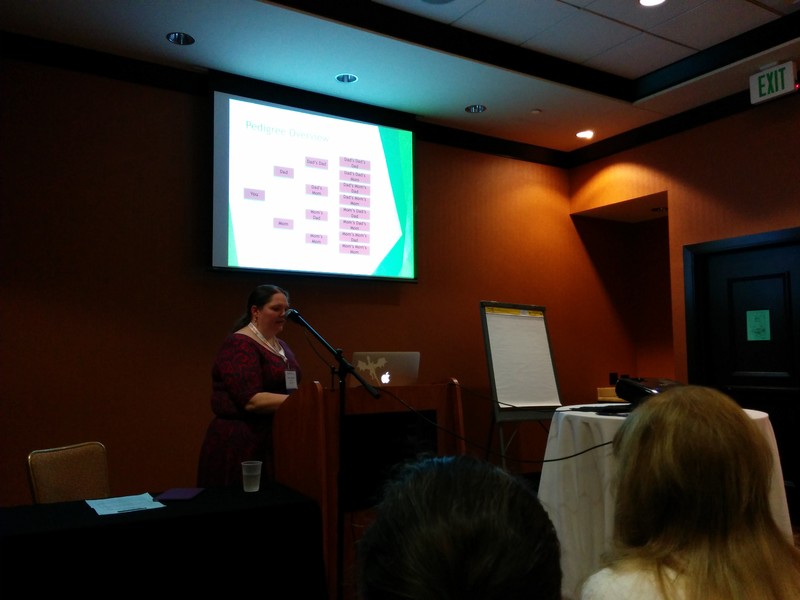 The 2016 Texas State Genealogical Society Conference was a great education event for genealogists Texas, and especially in Dallas.  Friday was all break-out sessions on special topics, while Saturday and Sunday had keynote speakers in the morning and breakouts in the afternoon.  All of the sessions that I attended were very good and will influence what I work on in the coming year and how I work. I'm not so interested in my family tree as I am in the social history of their time; genealogy is just a tool to get interested in history. In choosing sessions, I primarily concentrated on subjects that were new to me and speakers that are new to me as well.  I've been to enough conferences at this point that I've heard several of the keynote speakers several times.

I started off Friday with a session by Deborah Abbot on "Strategies and Techniques for Slave Research" that was enlightening for both the generally applicable research techniques to get back to a slave, and then the records that are specific to slaves and slave holders. I'm white, but I've taken a DNA test, and recognize that I could get a contact from someone who is black and connected to my tree during the the 18th or 19th century, though this isn't likely given where my ancestors lived in that time.  Kristin has gotten a contact from an African American man who is almost certainly connected to her tree in antebellum Texas. When we visit the relevant court house, it would be good to know the records to look for to assist in finding this connection.

My next session was Michael Strauss speaking on "The Great War: Researching Your World War I Ancestors." Although he focused on WWI, the archives and records that he discussed would be useful in researching any 20th century veteran. This was a very useful session, and especially so as we approach the 100th anniversary of the US entry in to WWI. In American History classes, this isn't covered to the degree that it should be; it had a much more profound effect on European politics, policy and culture than I think most Americans realize.  Most Europeans don't understand the degree to which America is still fighting the Civil War.

Sara Gredler's session on "Starting your DNA Journey: Why Test and How to Use Your Results" was perhaps the best overview session on DNA that I've heard. She covered Y-DNA, mt-DNA, at-DNA, and X-DNA and what specific ancestor relationships each can prove, or disprove.

Bernard Meisner's session on "Mining the Gems in a Civil War Pension File" was eye-openning as an exposure to the first major social welfare program in the United States.  In many ways, the Social Security program was an extension of the pension program, although this was not something that he discussed. I have some Civil War veterans among my ancestors, and will look at these records.

Debbie Parker Wayne's session on "X-DNA Inheritance and Analysis" was fascinating.  This is a relatively new test and is not as generally applicable as an autosomal test, but can be useful in ruling out some specific relationships.  More than anything else, I want to know how she does her "ginger bread man" diagrams to show how DNA is passed down from generation to generation. These are works of art and science. Her session on "DNA Analysis Tools (atDNA) was more generally applicable to what I will be working on in the coming year. The short answer: upload to GEDMatch.

Devon Lee's session on "A Recipe for Writing a Family History" was the best session I've attended on this subject. She had some very concrete ideas for where to start, which is the biggest problem for most people.

The final session that I attended on Saturday was perhaps the most interesting and useful of all of the sessions. Timothy Pinnick spoke on "And the Church Said Amen! African American Research" which was heavily focused on records specific to African Americans. Blacks did not generate as many court and land records as whites in the 19th and 20th century, so church records are an important alternative.  For my research, they are important for a branch that was on the frontier at a time when there was neither government nor court.

We have boxes of paper from our ancestors.  How should we go about reviewing, organizing and deciding what to pitch? The Summer 2016 Dallas Genealogical Society seminar "You Can't Take it With You: Preserving & Sharing Our Family Treasures" led by Denise Levenick was a great starting place. Now, we just have to start.

The box of "stuff" from my mom and dad's?  It looked like a bunch of old insurance bills that could be pitched, but a review of the bills gave me every address where my parents lived after they married, and a couple of my grandmother's addresses where my dad had his mail sent during WW II. There was a set of auto insurance stubs that showed my maternal grandfather's address--it looks like he paid for their auto insurance while my dad was in graduate school on the GI bill. It also had a military personal effects check list that gave his Army Serial Number and a couple of additional tidbits. I'm only half way through.

This box will allow geotagging for a lot of photos where we knew the city, but no one could remember the address of a residence.

Today's task is to read Levenick's book How to Archive Family Keepsakes for suggestions on how to catalog this box of stuff. The basic cataloging structure that I've decided upon is

I'm not sure about digitizing this; certainly parts of it make sense. Some of it would scan well on the Scansnap auto feeder.