Here we are the end of the second week of Thomas MacEntee's Genealogy Do-Over project, and I'm already behind!  A large part of that is that we were traveling for much of the first week of the Do-Over, so I was late getting started.  And getting the blog started, while fun, has involved more initial set-up than I realized.  (I suspect there's an article from that...).

The tasks for Do-Over week one were:

What I've done so far:

I'm sure I'll think of more guidelines as I get into this.  And that's the whole point, isn't it?

Pages from the Gay Family Bible

In the papers passed down from my father are four original pages removed from a Bible. These pages contain entries for birth, marriage and death for a number of individuals in the Gay family, starting with the birth of Martin Gay in 1766. I don't know what happened to the Bible or who wrote or ultimately removed these pages, and my father is gone so I can't ask him. It goes against my nature to remove pages from any book, much less a Bible. But I'm thankful that these pages still exist. I realize that I'm the only who probably has copies of them, so it's only right to share. I will also let the members of the RootsWeb GAY mailing list know.

The images below are saved as bi-level jpegs and aren't the best quality (especially for a couple of entries with blue ink on the Deaths page).  I do have higher resolution TIFF files in color, but they are too large in size to post here. My best effort at transcription follows the images. And we're working on a way to add a Contacts page in case you want additional information. 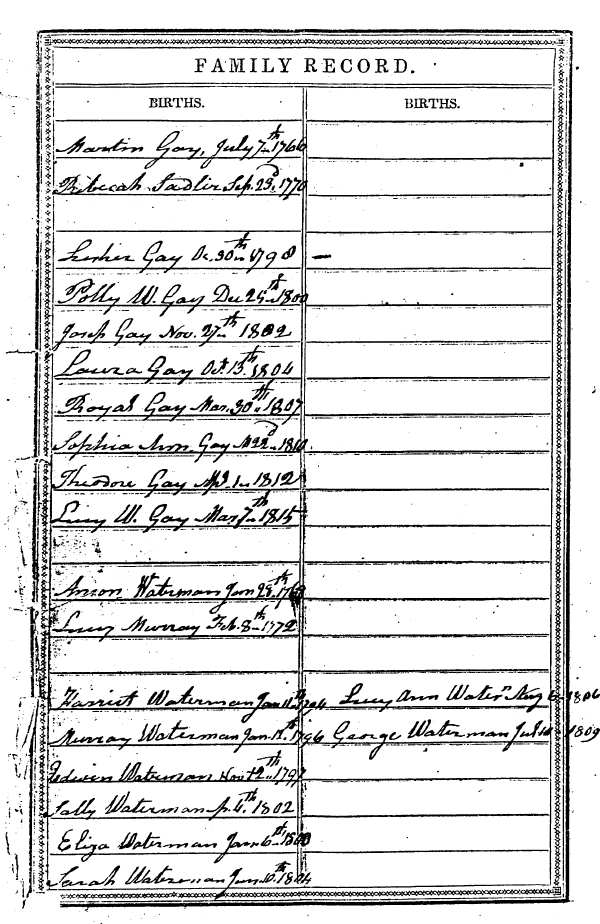 Kristin is participating in a genealogy “do over” where she is starting from an empty tree and inserting information from scratch with everything done the way she now knows is correct. We are taking this opportunity to look at a number of different aspects of how we work on family history. My job is back up and recovery, and I'm revisiting that.

We use Macs, and have TimeMachine configured--and have tested it under fire. That is our first level of backup. I also clone disks using Clonezilla. Both of these are occasionally swapped with drives in a safe deposit box. The third backup is through Backblaze, a cloud backup service that offers unlimited storage for $5/month per machine, but only for native and USB attached disk drives.

The problem is that our photos are stored on a Western Digital Wordbook II NAS device. It has mirrored drives and has proven to be quite reliable, but there is no convenient way to back it up for offsite disaster recovery. As we become more dependent on digital photography and scanned images, I needed to come up with something better for storing photos.

Linux and OS X have long had the ability to set up software based RAID arrays, and Windows 8 has this capability as well. It was time to get a pair of high capacity USB drives, configure them in a RAID array and transfer all of our digital images to the USB RAID array where Backblaze would back them up. RAID (Redundant Array of Inexpensive Disks) is a term for setting up a high-reliability and in some configurations high performance disk system. For a mirrored configuration (RAID 0), both drives in the pair must fail before you lose data. RAID 0 protects you from disk drive failures, but not from doing stupid things like deleting a file. It is not a substitute for offsite backup which protects you from fire, flood and theft.

About The Intentional Genealogist

Welcome to The Intentional Genealogist. We picked that name because -- I admit -- I (Kristin) have been a sloppy, leaf-collecting, non-resourcing genealogist. Until now. Inspired in part by Thomas MacEntee's Genealogy Do-Over, I'm starting over to research deliberately and intentionally.

This blog and site are a family affair. I'll be concentrating more on the genealogical research aspects, while my tech support staff -- I mean, my husband -- will contribute articles from the technical perspective.

About Kristin:  On my mom's side, I'm a fifth generation Texan with roots back (I think) to the Republic of Texas. (Yes, that search will be one of my topics.) Further back on my mother's side, my family came to Texas from Louisiana, Arkansas, Alabama, Georgia, and South Carolina (and ?? -- still a work in progress.) My father's side of the family came to Illinois from Vermont, Massachusetts and England as well as from Virginia and from Scotland. As part of my intentional do-over, I've been able to join the National Society of the Daughters of the American Revolution (NSDAR) through a five-times great grandfather on my mother's side. That process taught me the value of complete documentation! I've recently retired as a software technical support specialist and thus am able to spend more time on the fun stuff! In addition to the NSDAR, I'm a member of the Dallas Genealogical Society and the New England Historic Genealogical Society (NEHGS) and plan to join more local societies in my ancestral locations.

About Bruce:  I've gotten involved with genealogy and the blog because I can help Kristin with the technical aspects. Because of our professional backgrounds, we have a fairly complex computer set-up with multiple platforms (OS X, Windows, and Linux) and networked storage. This is a nice problem to have, but it has led to frustration for Kristin because of fragmented storage. "Where did I put that?" is a lament I've heard more than once. So as part of the do-over, we're re-evaluating tools and reorganizing storage. Oh, and I do get involved in the genealogy. When I travel with Kristin to conferences and libraries, I consult with my eldest sister who is keeper of the Moore Family genealogy on tasks she needs accomplished. My day job is developing technologies and products to bring mathematical optimization techniques to community financial institutions (Moore Software Services, LLC).