A Virtual Reunion of a Separated Family Artifact

My father's paternal grandparents and great-grandparents (so my g-grandparents and 2g-grandparents) came from Scotland to the United States in 1851. They left their home in Paisley (near Glasgow) and sailed from Liverpool to New Orleans before making their way up the Mississippi River to settle in Illinois. My great-great-grandparents (Thomas White and Esther (Watson) White settled in Pike County, Illinois, where he became a farmer; he'd been involved in the weaving industry back in Scotland. Their third son and my great-grandfather, also named Thomas, initially settled in Pike County (according to his Declaration of Intention), but by the 1855 Illinois State census was living in Quincy. The successive censuses provide an idea of his achievements. In 1860, his occupation is shown as "Moulder." In 1870, he is a "Stove Manufacturer" with a personal estate value of $6,000 and real estate of $15,000; in 1880, his occupation is listed as "Stove Foundry".

From a photocopy from a book on Quincy (ca 1888; I need to find the exact title):

Thomas White was born in Scotland; came to Quincy in 1852, and when first arrived was engaged in making flasks and patterns. When Mr. White first came to this city he possessed but little of this world's goods, but he did possess that which always insures the success of men. He was honest and ambitious and industrious, and with these, as his only capital, he has advanced step by step; higher and higher, until he is now at the summit of a successful life. He possessed the spirit of the Pilgrim Fathers and thus made this western country his home, and we have all been blessed and benefited by his coming.

In 1863 Mr. White, Mr. Bonnet and Mr. Duffy commenced the manufacture of stoves and hollow-ware, under the firm name of White, Bonnet & Co., possessing a total capital of about three thousand dollars. In 1866 Mr. White bought out the interests of his partners and conducted the business, which had grown very large, alone, until 1887, when the present firm of The Thomas White Stove Company was incorporated as a stock concern, with a paid up capital of one hundred and fifty thousand dollars. Their foundry, warerooms and offices occupy nearly a half block, in the heart of our city, and is, as may be imagined, very valuable property. We believe that Mr. White was, about 1860, foreman of the Phoenix Stove Works, and so it may again be seen how energy and enterprise, honesty and industry, will win in the city of Quincy, if practiced as Mr. White has practiced it--faithfully and persistently; a successful life is that of the subject of our sketch.

Thomas White was an active member of a number of groups in Quincy, including the Bodley Masonic lodge, and he and wife, Mary, were members of the First Union Congregational Church, the first church in Quincy. In honor of their parents, Robert (my grandfather), Thomas C., and Mary (White) Wilson, children of Thomas & Mary, donated a Tiffany window to the church when its new building was dedicated in October, 1874.

The first time I saw the Tiffany window was in 1965, when my parents and I visited Quincy to attend the funeral of one of my father's cousins. The complete window was in a prominent place in the sanctuary. In 1968, the Gothic Revival building "which had served for nearly a century" was razed, and the new church building opened in March 1970. "In keeping with the colonial tradition, the windows are plain glass. However, the church retained two very fine stained glass windows. A portion of one is located behind the chancel in the Moorman chapel and a portion of the other graces the South side of the Heritage room." (https://firstunionquincy.org/about/history/) When my husband and I attended the Federation of Genealogical Societies (FGS) Conference in Springfield, Illinois, in August 2016, we spent time both in Galesburg (another side of the family) and in Quincy researching my family history. I visited the First Union Congregational Church and the Moorman Chapel and was able to see the main part of the window displayed there.

By now, I'm sure you've guessed that the virtual reunion of the title refers to the window, or specifically, two separate portions of the original window. The window as displayed in the Gothic Revival church building was separated into two pieces. The largest piece of the two is the window now in the Moorman chapel behind the chancel. 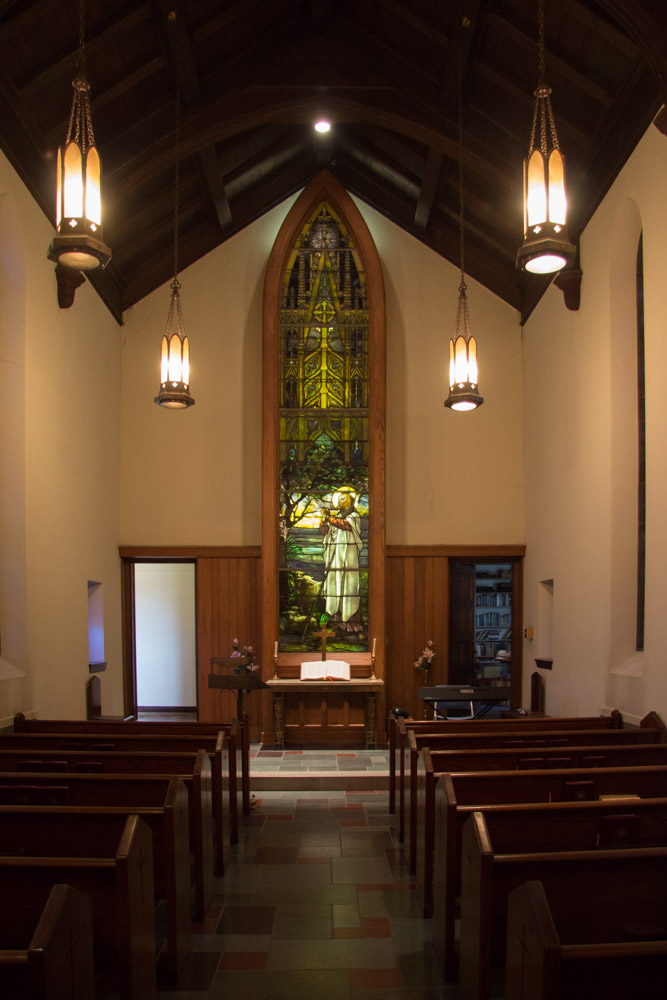 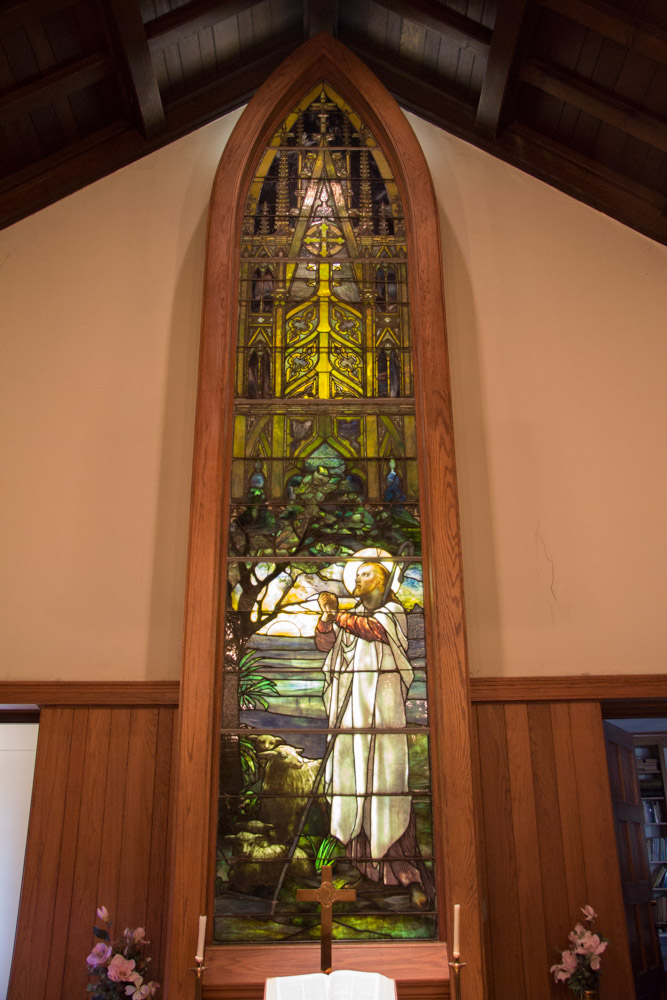 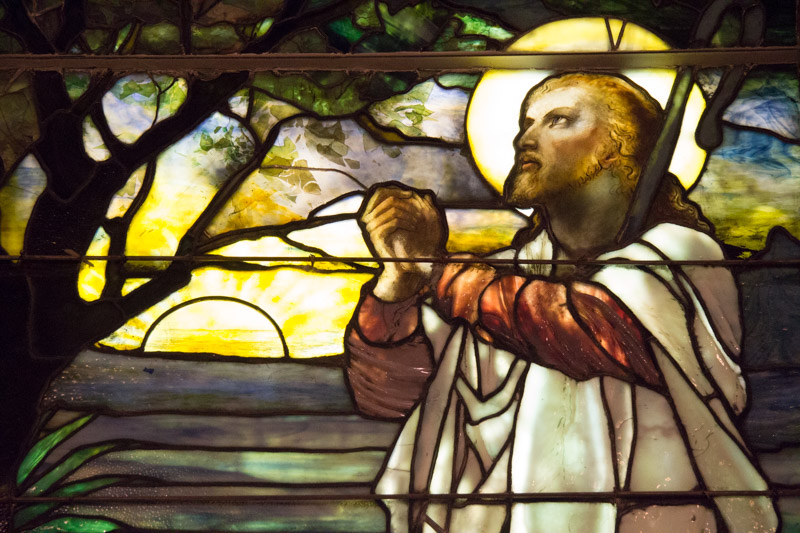 The remaining part of the window, which is the dedication, is now displayed at the History Museum on the Square at 332 Maine Street in Quincy. I don't think the pastor at the church had any idea that there was another piece until I mentioned it to him. 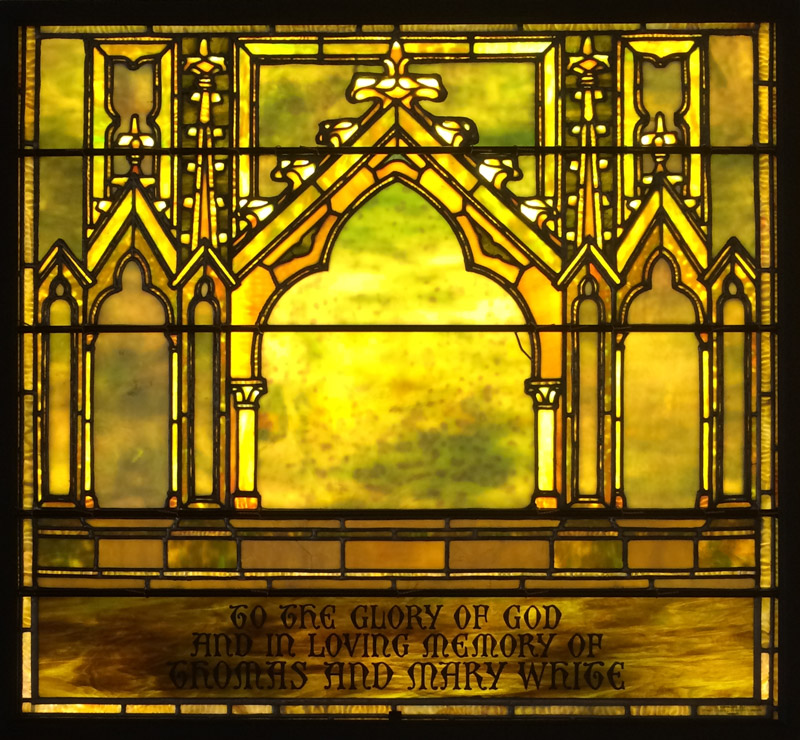 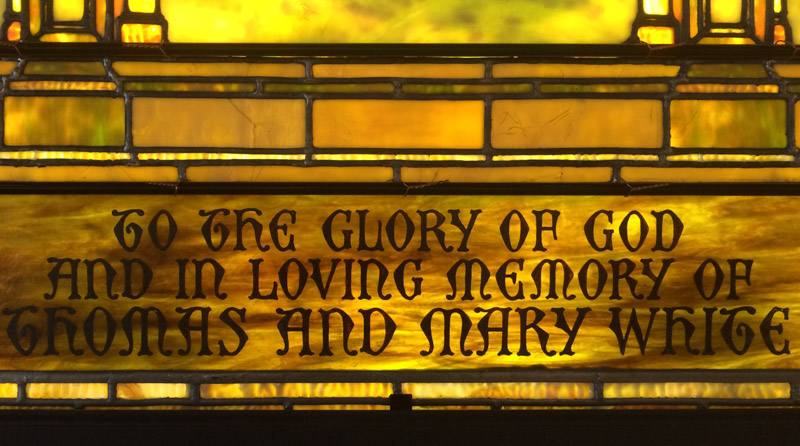 So, while the two pieces of the window are physically separated, I've now reunited them virtually as they should be.

Quincy, IL is a river town in Illinois that was a manufacturing hub during the 19th and early 20th centuries.